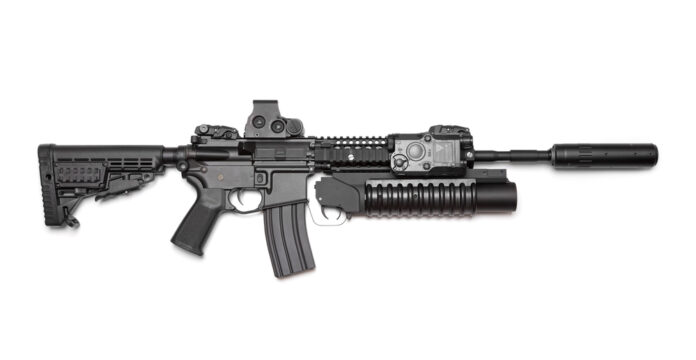 Virginia Democrats continue to show that they are going full nutzo anti-gunner with a new bill proposed by Delegate Mark Levine.

AWR Hawkins gives us details on this terrible bill:

A bill from Delegate Mark Levine (D) mandates all Virginia AR-15 owners acquire a license of ownership from the state.

Those who do not acquire a license yet remain in possession of AR-15s will be labeled felons.

Levine’s legislation, HB 961, applies to AR-15s and all guns which Democrats refer to as “assault firearms.”

Levine defines an “assault firearm” as “a semi-automatic center-fire rifle that expels single or multiple projectiles by action of an explosion of a combustible material with a fixed magazine capacity in excess of 10 rounds.”

He also notes certain cosmetic traits that place a certain gun under the “assault firearm” classification:

“An ‘assault firearm’ means a semi-automatic center-fire rifle that expels single or multiple projectiles by action of an explosion of a combustible material that has the ability to accept a detachable magazine and has one of the following characteristics: (i) a folding or telescoping stock; (ii) a pistol grip that protrudes conspicuously beneath the action of the rifle; (iii) a thumbhole stock; (iv) a second handgrip or a protruding grip that can be held by the non-trigger hand; (v) a bayonet mount; (vi) a grenade launcher; (vii) a flare launcher; (viii) a silencer; (ix) a flash suppressor; (x) a muzzle brake; (xi) a muzzle compensator; (xii) a threaded barrel capable of accepting (a) a silencer, (b) a flash suppressor, (c) a muzzle brake, or (d) a muzzle compensator; or (xiii) any characteristic of like kind as enumerated in clauses (i) through (xii).

If Levine’s bill passes the state legislature and is signed into law, current AR-15 owners–and owners of other so-called “assault firearms”–will have a grace period in which to acquire license from the state.

Levine uses the summary of his bill to note that “any person who legally owns an assault firearm on July 1, 2020, may retain possession of such assault firearm after January 1, 2021, if such person has obtained a permit from the Department of State Police to possess an assault firearm in accordance with procedures established in the bill.”

Now, some people may say that Levine’s bill doesn’t mention confiscation. Let me point out that these people, like anti-gunners in general, are people who do not think far enough ahead to understand the long-term impact of something or the logical conclusion. What does allowing a gun owner to retain ownership of the weapon mean if the opposite (confiscation) is the alternative?

One of the biggest problems with Levine’s bill, which is a fundamental error in anti-gunner thinking, is the idea that Virginia AR-15 owners are only allowed to keep their firearms if the government allows it. But rights do not derive from the government. We have our rights at birth, and the only legitimate use of government is to defend our rights. Thus, government does not have the right to take firearms from us (no, not even like the one in the image above). Levine, like all anti-gunners, has it completely backwards.

And that is why there is a #VAGunRightsRebellion happening right now.