Home News Hypocrite Or Stupid? March For Our Lives Organizer Says They Are Pro... 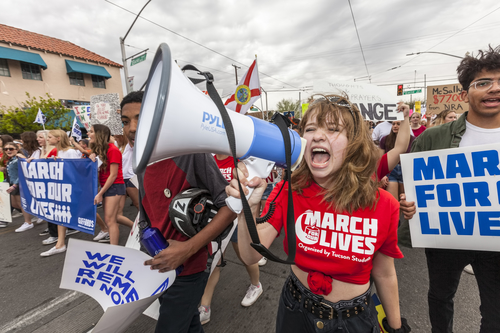 If you’ve been reading this website for any amount of time, you know that we don’t have much (any) respect for March For Our Lives, the organization that David Hogg and his cohorts put together with the help of big money from anti-gun groups to try to guilt the rest of the country into giving up our guns and being defenseless.

In case you aren’t a long time reader of this site, I’ll just be up front and say that we think that the teenagers in March For Our Lives are, at best, ignorant and, at worst, chumps who have willing gone along to be used by anti-gunner organizations.

But, a new statement by March For Our Lives co-founder Emma Gonzalez makes me think that the right word to describe them may be “Hypocrite.” An article on the NRA-ILA website gives us the details:

Take Emma Gonzalez, one of the leading personalities behind the March for Our Lives gun control lobby, which arose in the wake of the terrible murders that occurred at her high school in Parkland, Florida. Gonzalez appeared in Variety magazine this week, supposedly to clear up “misconceptions about what gun regulators actually want.”

“We try our very darndest to get out the fact that we don’t want to take away guns and that we are pro second amendment,” Gonzalez told Variety. “We’re not trying to take guns out of society, we’re trying to regulate them.” She added, “If you’re already a responsible gun owner, then this has nothing to do with you.”

So much for the innocence and righteous indignation of youth.

Emma is doing exactly what she claims to deplore about the supposedly callous and cynical politicians she has criticized so forcefully in public. She is lying and trying to mislead people.

Start with the fact that Gonzalez has from the outset of her gun control advocacy argued for the sorts of prohibitions imposed by countries that have no constitutional right to arms and that do not recognize self-defense as a valid reason to own a firearm. In a February speech that catapulted her to national prominence, Gonzalez specifically mentioned Australia and the U.K. as models for the U.S. to follow, claiming (incorrectly) that Australia eliminated mass shootings after the country “introduced gun safety.”

But there can be no serious argument that Australian-style gun control is compatible with the individual right to keep and bear arms that Americans enjoy, as that regime involved the large-scale forced surrender of lawfully obtained firearms. And while Australian gun owners were promised government-determined compensation for turning in their retroactively-banned guns, it wasn’t as if they had a choice, other than to risk going to prison.

And let’s not forget that the “March For Our Lives” website specifically lists banning semi-automatic “assault rifles as part of it’s goal.

Look, the fact of the matter is that gun control always leads to efforts for gun confiscation. It’s unconstitutional, and it leaves people defenseless against criminals who will still carry guns.

If this situation with Emma Gonzalez doesn’t prove that gun control advocates are hypocrites, then nothing will.