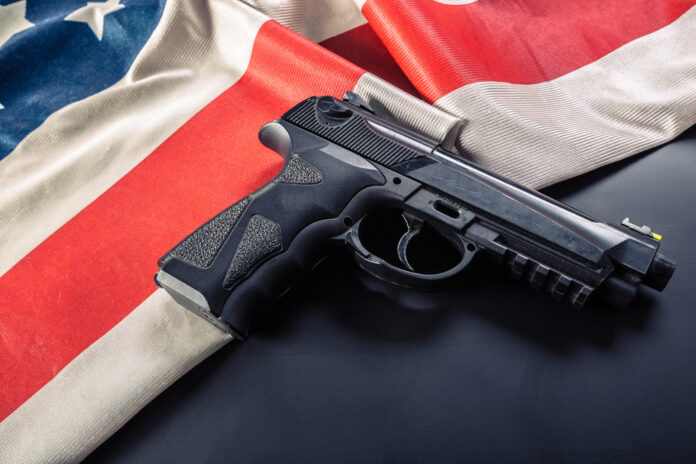 As anti-gunners are ramping up their rhetoric and pushing harder than ever to disarm you and me, some states are starting to wake up and smell the coffee.

As you know, if you’re a regular reader of this site, one state is already looking at ways to nullify Federal red flag laws (see here). But now another state is moving in that direction, too, only they are making an even bigger move.

In other words, they have their heads screwed on straight about gun ownership. Mike Maharrey gives us the details:

Bills prefiled in the Missouri legislature would set the foundation to create a “gun rights sanctuary state” by banning state and local enforcement of most federal gun control. Passage into law would represent a major step toward ending federal acts that infringe on the right to keep and bear arms within the state in practice and effect.

Sen. Eric Burlison (R-Battlefield) filed Senate Bill 588 (SB588) for introduction in the 2020 legislative session. Rep. Jered Taylor (R-Republic) filed the House companion bill, House Bill 1637 (HB1637). Titled the “Second Amendment Preservation Act,” the legislation would ban any person, including any public officer or employee of the state and its political subdivisions, from enforcing any past, present or future federal “acts, laws, executive orders, administrative orders, court orders, rules, or regulations” that infringe on the right to keep and bear arms.

The bills include a detailed definition of actions that qualify as “infringement,” including but not limited to:

taxes and fees on firearms, firearm accessories or ammunition that would have a chilling effect on firearms ownership;

registration and tracking schemes applied to firearms, firearm accessories or ammunition that would have a chilling effect;

any act forbidding the possession, ownership, or use or transfer of a firearm, firearm accessory, or ammunition by law-abiding citizens;

any act ordering the confiscation of firearms, firearm accessories, or ammunition from law-abiding citizens.

The proposed law defines “law-abiding citizen” as “a person who is not otherwise precluded under state law from possessing a firearm.”

Under the proposed law, infringement on the right to keep and bear arms would include the National Firearms Act of 1934, the Gun Control Act of 1968. Pres. Trump’s bump-stock ban, proposed federal “red-flag laws,” and any future gun control schemes implemented by the federal government.

The legislation includes a provision that would allow anybody who violates the law and knowingly deprives somebody of their right to keep and bear arms as defined by the law to be sued for damages in civil court.

“Sovereign, official, or qualified immunity shall not be an affirmative defense in such actions.”

The bills also include provisions that would apply to federal agents who knowingly enforce or attempt to enforce any of the infringing acts identified in the law, or who give material aid and support to such enforcement efforts.

Now, if you’re like many people who aren’t familiar with the inner workings of state and Federal government, you may wonder how this can actually work, but as Maharrey points out in that same piece, the Federal government relies heavily on the states to enforce Federal law. If a state government does not enforce that law, they have, effectively, nullified the law.

And Maharrey also points out that there is a legal precedent for states to take this step based on the anti-commandeering doctrine which is based on several Supreme Court rulings. In a nutshell, this legal doctrine says that the Federal government must provide the means to enforce their own laws and cannot make states cooperate to do that.

Of course, even the Federal government has some limits to their means, and they simply don’t have the resources to enforce everything. Thus, if a state doesn’t cooperate, that state nullifies that Federal law.

It will be interesting to see what happens, but based on what is happening in some states which are currently run by anti-gunners, it seems likely to me that many people are going to consider moving from Virginia, California, and New York to Missouri, Oklahoma, and other gun friendly states. This will be worth keeping an eye on.