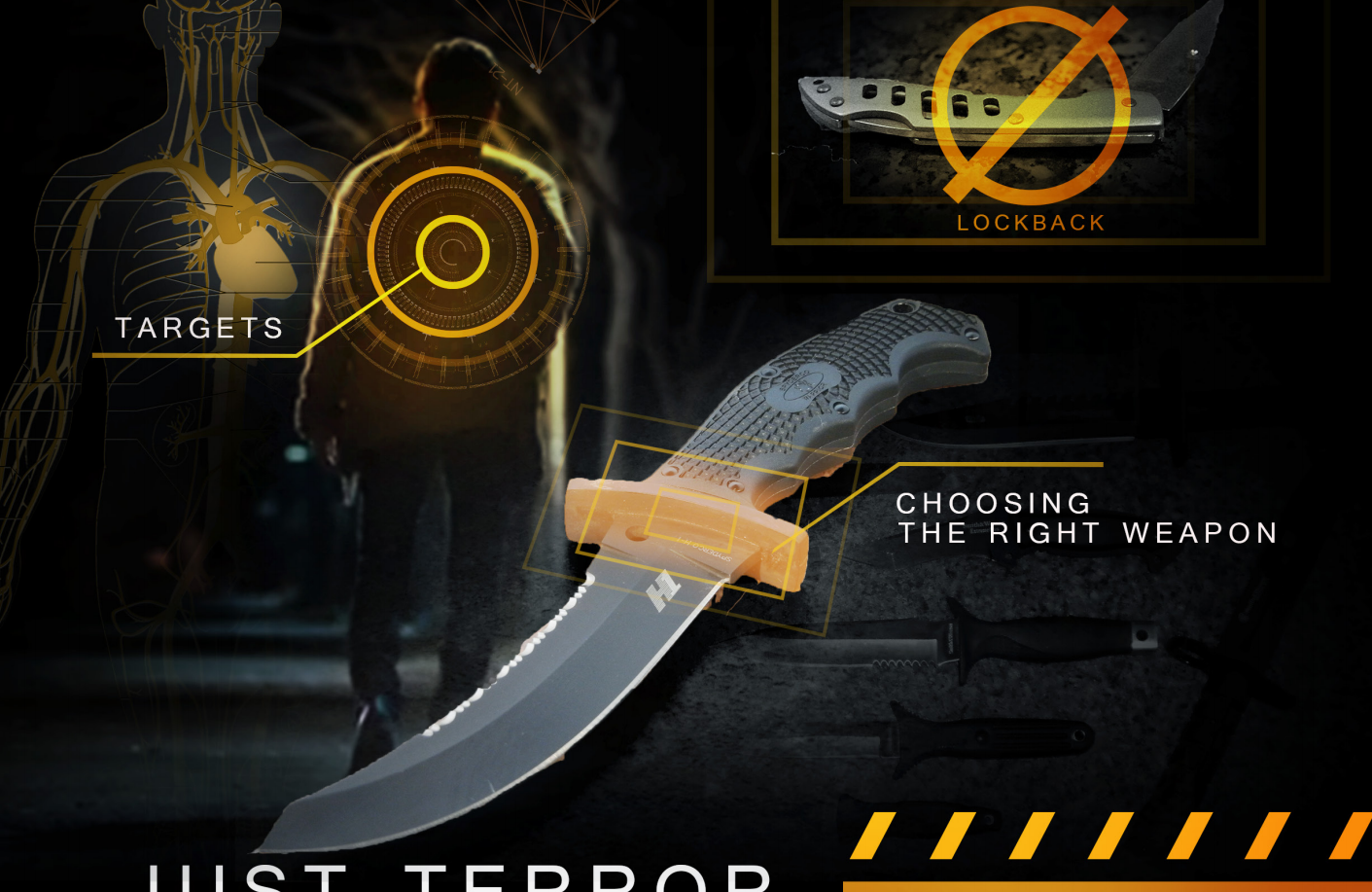 As you probably heard, ISIS recently made it public that they want all their little Johnny Jihads around the world to start killing more people.

But they didn’t recommend more bombs, guns, or even vehicles as the weapon of choice.

They encouraged their followers to use a weapon that’s plentiful, available everywhere, can be carried almost anwhere, easily concealed, never runs out of ammo, and takes zero training to inflict massive damage…

In a new magazine from ISIS called “Rumiyh” they released a lot of propaganda. Of note is the article under “Just Terror Tactics” (I guess this is a name for a regular column they have in their magazine?)

It urges followers to start killing more infidels like us with knives.

To quote (emphasis mine) …

“When considering a just terror operation, an ocean of thoughts might pour into one’s mind, clouding the ability to make a final decision. Whether in regards to the type of operation one seeks to conduct or the details of that operation, it is easy for someone to be defeated by doubt if they have not received proper guidance or training. Yet, one need not be a military expert or a martial arts master, or even own a gun or rifle in order to carry out a massacre or to kill and injure several disbelievers and terrorize an entire nation. A hardened resolve, some basic planning, and reliance on Allah for success are enough for a single mujahid to bring untold misery to the enemies of Allah, in shaallah.”

And that is the danger of knife attacks and why ISIS is sure to use MORE of these attacks in the future.

In case you didn’t know, they’re already using plenty of them.

ISIS writes the answer in their magazine …

“One might ask why knives are a good option for an attack. Knives, though certainly not the only weapon for inflicting harm upon the kuffar, are widely available in every land and thus readily accessible. They are extremely easy to conceal and highly lethal, especially in the hands of someone who knows how to use them effectively. Also, due to their accessibility, were a person to conduct a campaign of knife attacks, he could dispose of his weapon after each use, finding no difficulty in acquiring another one…”

All those are important points.

All those are reasons you should not just think about crazy Jihad Johnny with an AK-47 shooting up the local shopping mall, but also be prepared to deal with a knife attack by said Jihadi.

Why Knife Attacks Are So Dangerous …

Many people fear knife attacks and for good reason.

There are a lot of tough guys, guys that have been in a lot of life and death confrontations, that don’t like being in a knife fight.

I don’t think I really need to “sell” you on a knife attack being dangerous, but just understand that they are dangerous.

And, as ISIS points out, ” … one need not be a military expert or a martial arts master, or even own a gun or rifle in order to carry out a massacre or to kill and injure several disbelievers and terrorize an entire nation.”

In short, even a bumbling idiot with a knife can hurt you.

Plus, he won’t run out of bullets.

And, the knife won’t malfunction and stop working. Remember the Paris train attack? The Americans who took that terrorist out were essentially able to do so because after the initial shots — the terrorist had a malfunction with his AK-47 that slowed him down long enough for them to act.

First off, I’ve been a black belt in Taekwondo since 2001 and before/after that — my whole life — I’ve been in or around martial arts so I have some perspective on this as far as unarmed vs knife stuff.

The truth is that most traditional martial arts have set patterns or methods of defense against knife attacks that start out looking something like the picture below.

In other words, one guy holding a knife showing you he’s about to attack you and one guy getting ready to defend. 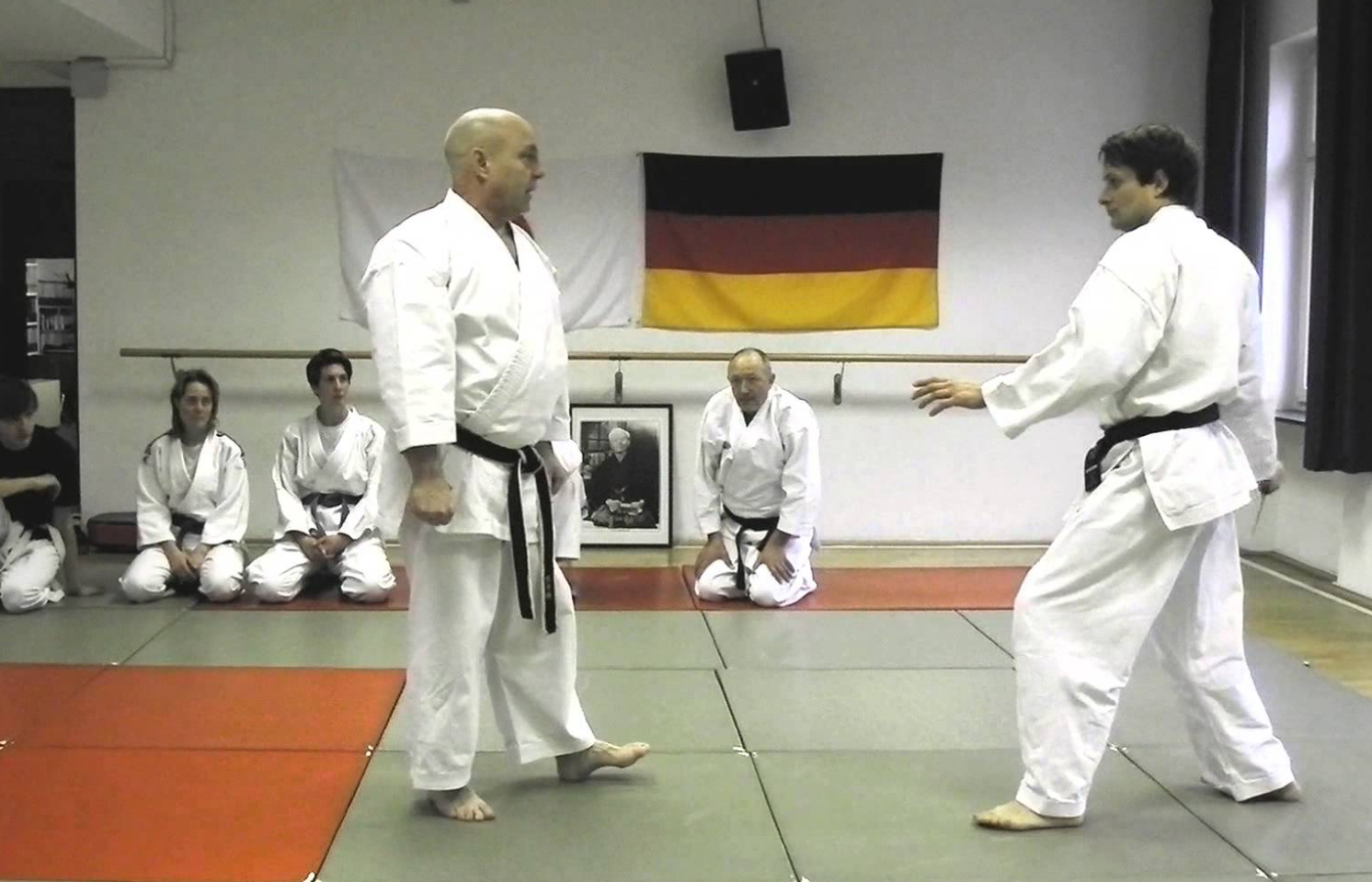 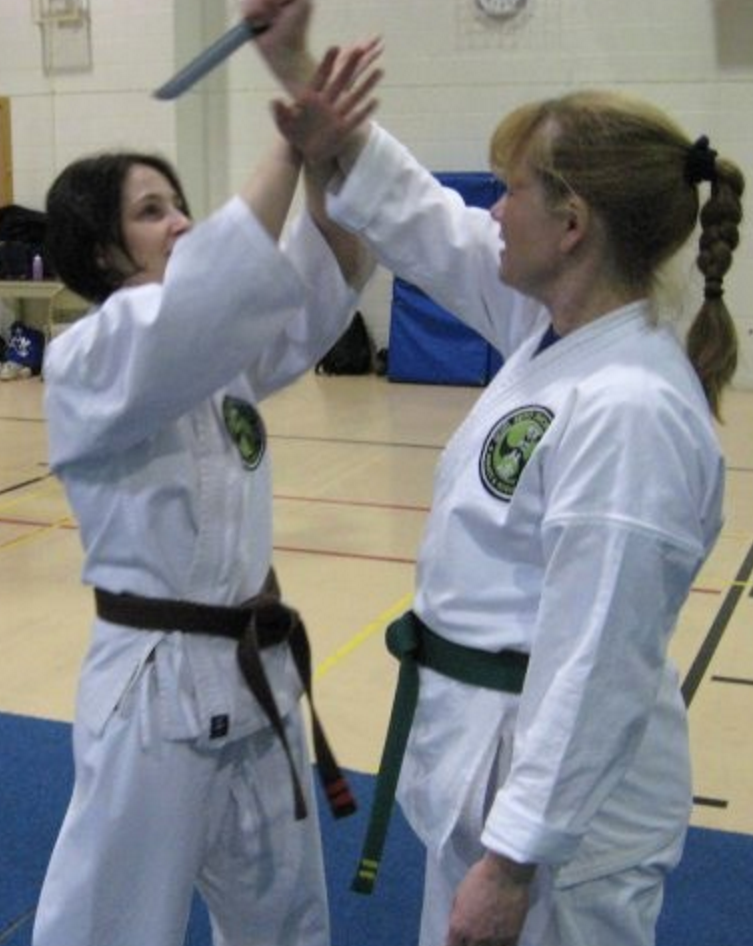 Or maybe it’s a slow and not very determined stabbing motion, like the picture below …. 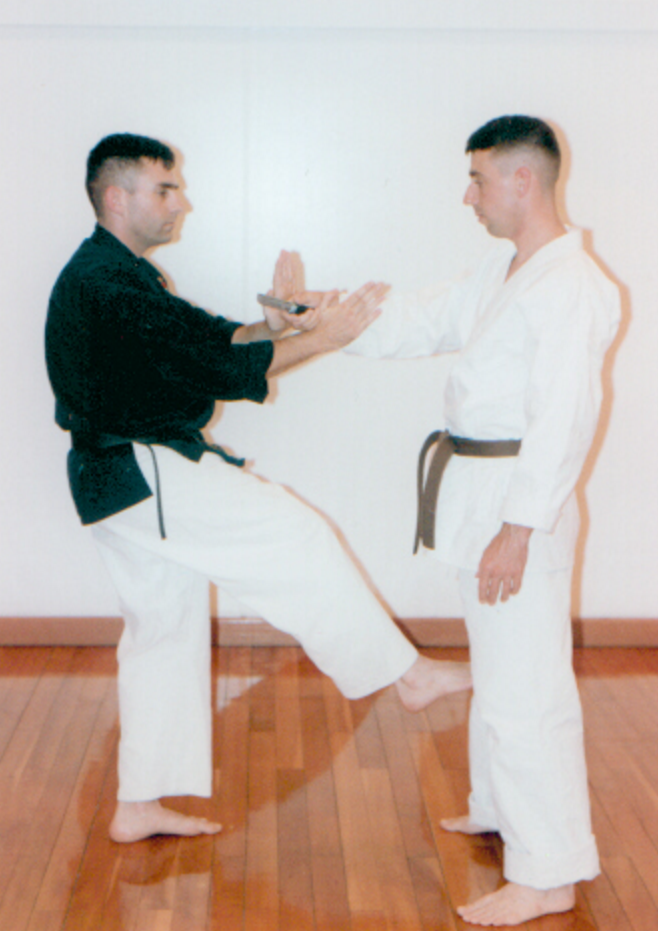 But the absolute worst is the “slashing back and forth” motion that many martial arts teach you to defend against, like the picture below: 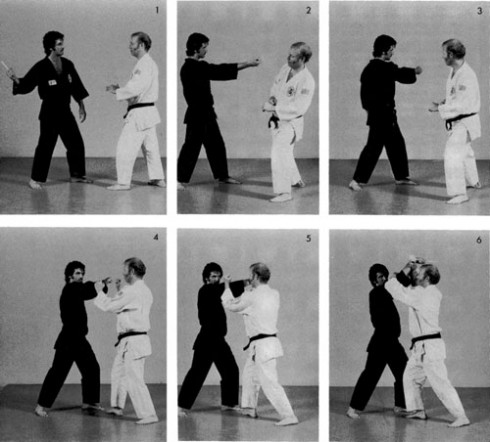 Typically it’s something like “wait till he swings for your head then make your move while his arm is sticking out there”.

In short, all that is practically useless.

There are two keys I want you to take away about the reality of knife attacks and how they typically happen:

1. They are fast, violent, and typically STABBING attacks

2. You probably will NOT know you’re being attacked with a knife until AFTER you have been stabbed.

This is the reality.

All you have to do is jump on youtube and look up “Real knife attacks” and watch security camera footage of people killing other people (or attempting to) with knives.

They don’t dance around like a trained knife fighter slashing and making intricate X patterns or anything of the sort.

They typically run up, crash into someone and start sticking the pointy end of the knife into their victim as fast as possible and as much as possible …

Watch the video below where this guy, who I don’t know, is talking about the reality of knife attacks. He is right:

NOTE: I don’t know this guy, so I’m not recommending his product, but what he’s saying about how knife attacks actually happen is true.

How To Actually Defend Against Knife Attacks

First, if you can, you should run away or not be there.

If that’s not possible, because you just got stabbed and that was the first thing that told you that a knife attack was happening then you need to fight back.

IF you are far enough away, or if you are only stabbed once and the attacker has backed off — you MIGHT be able to draw a gun and shoot him.

IT goes without saying if you can’t run away and/or you see a random guy stabbing someone — you can shoot him relatively safely from a distance.

If you’re close and he’s stabbing you, you MIGHT be able to draw a gun in time and put rounds into him to get him to stop. You might not. It depends on how violent and fast the attack is happening.

In the video below Paul Sharp shows you how to apply some simple MMA techniques that work well to defend against a knife attack. Listen to everything he says because he knows what he’s talking about and he shows you how to practice from the “start” of “I just got stabbed”:

Notice that Paul takes you to the point of where you go “2-on-1” with the knife hand.

Then after you get that 2-on-1 grip and control of the arm, you can control the person.

HOPEFULLY, if this is a “mass” stabbing attack by an ISIS inspired terrorist there will be someone else to help you at that point.

To take this a little further, in the video below, this guy shows you with a “shock knife” that shocks you if you get “cut” how this 2-on-1 strategy plays out …

1. You have to first “clinch” in (usually this distance closing is taken care of for you, by the considerate bad guy because he just stabbed you and wants to stab you more, so you’re plenty close enough)

2. More importantly, notice he grabs the UPPER arm first, then slides down to get more wrist control. This is super important. Trying to “catch” the guys hand/wrist while he’s stabbing you is VERY hard and might end up with you having broken thumbs and getting stabbed even more.

3. Once the 2-on-1 grip is established, he puts his body weight and shoulder and momentum into the guy and then …

4. Puts him into the ground. Another choice, if you’re still standing is to get him up against a wall. Either way, you don’t want him backing up making space. Get him not moving.

5. From here you can hopefully get the knife from him, or keep one hand on wrist control, grab your gun with the other and shoot him. Or in some other way start to prevail. Also hopefully, you have someone else that can jump in and beat him down with you.

If you can get the knife out of his hand, even if you can’t take control of it, kick it away then you could choke him out like I show you in this article on how to choke out a terrorist (it’s worth pointing out that the aforementioned Americans on the Paris train choked out the AK-47 wielding terrorist, who then pulled out a box cutter and tried cutting the hands of the guy choking him, but he was a badass and determined so he just kept choking the jihadi till he was unconscious. Then they tied him up. This stuff works.)

Another option, maybe if you get on top of him, while still maintaining wrist control of the knife hand you can beat him unconscious with the other free hand. Either knocking him out or choking him are the two most reliable ways to get him unconscious.

Finally, in this video with Tim Kennedy, certified badass and current active duty Special Forces AND current professional MMA fighter in the UFC, you hear him riff at SHOT show 2016 on how to defend against a knife attack. That part starts around 3:50 but really you should watch the whole thing because it’s Tim Kennedy and Merica’

A good resource to learn more about knife defense is the “Red Zone Knife Defense” program that can be found at CenterlineGym.com. Or you could take a class with Paul Sharp shown in the video above (which I hope I get to do soon!) Another well recommended trainer is Craig Douglas of SouthNarc fame (whom I also want to train with ASAP!)

This article is more so just to introduce you to the reality of how knife attacks actually happen. Hopefully, it helps, but it should be obvious without practicing this stuff in real life you’re not going to be very good at defending yourself against a knife attack.

Still, You CAN prevail.

Be aware of how knife attacks actually occur, this will slow down your “reaction gap” if you ever find yourself getting attacked …

Know that you can survive and prevail if you keep fighting.

Does this help? Have you ever had any experience training against knife attacks?