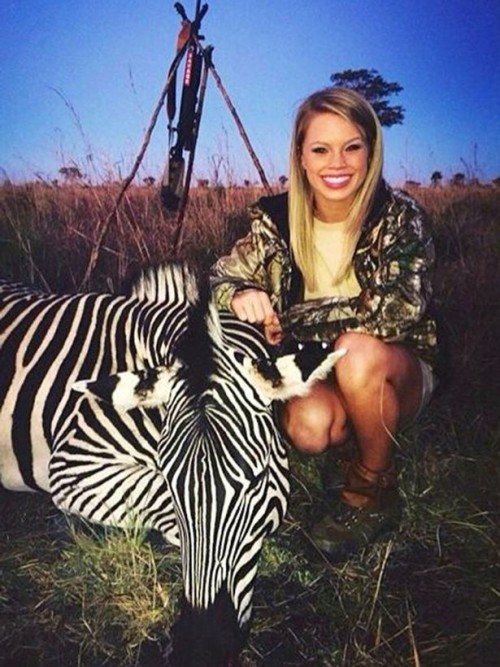 By now, you’ve heard about all the hubub a while back over Kendall Jones, a pretty blonde high school student who posted some pictures to her Facebook account of a big-game hunting trip to Africa.

Here’s one of my favorites:

The pictures are what you would expect from such a trip: She’s posing with animals she shot and killed, including a lion.

I would basically say you’re free to find such a sport repugnant, too… although I would also say if you’re against hunting altogether and you eat meat, you’re a hypocrite.

People on both sides of the gun ownership issue can and do argue about these issues all the time. The reason Kendall Jones represents a newsworthy and special case, though, is because her story went “viral.”

Her Facebook pictures were circulated by people outraged that this girl dared to engage in sport hunting in Africa — an activity that is perfectly legal and whose requirements Kendall followed in pursuing her hunt.

After all, there are consequences to free speech, especially in our Internet-connected age.  Say unpopular things, you will be unpopular.  Post unpopular pictures, people will detest you for it.

The fact is, though, that to most rational, reasonable adults, until very recently, the fact that some people engage in “big game hunting” is not remarkable.  The United States has a long history of hunting, and before the Europeans and their neighbors allowed themselves to be neutered and disarmed by the marching forces of socialism and political correctness, they, too, engaged in hunting.

For all human beings, hunting was once a way of life, and while the advent of modern grocery stores (and a rise in popularity of vegetarianism and veganism) means that far fewer people hunt these days, there is still a large portion of the American population that sees it as perfectly normal.

This is important, because it is tied to the decline of the gun culture in the United States.

As rural living declines (a huge chunk of the United States population lives in a few major urban centers on the coasts, such as New York City and Los Angeles) and fewer Americans are raised, by default, to be familiar with guns, shooting, and related sports and activities, the gun culture in our nation is slowly dying.

The rise in bizarre interpretations of “zero tolerance” policies in our school helps make everything worse:  If a child can be suspended or expelled for drawing a picture of a gun, or even for nibbling his toaster pastry into a gun-like shape, then kids are brainwashed into believing guns are inherently evil and should be avoided if you are a “good person.”

They grow up into people who vote Democrat and therefore support infringements on the Second Amendment and your firearms rights.

The problem we have within the gun culture, however, is almost as bad as the one we as a gun culture have with the rest of society.  Yes, gun ownership is increasingly becoming equated with vice.  Yes, there are more and more gun-ignorant liberals brainwashing our children and clogging up society with their hatred of self-defense and their irrational fear of guns.  But we, as a culture of gun owners, are becoming split, and not in the way you might think.

Do you remember the name “Zumbo?”

Jim Zumbo was a firearms and hunting writer who was the hunting editor of “Outdoor Life” and the host of a television program called “Jim Zumbo Outdoors.”  One day back in 2007 or thereabouts, Zumbo decided that he didn’t like those evil black scary assault rifles, and he spoke out against them.  Just what prompted him to wake up insane that day isn’t clear, but Zumbo was rightly termed a “Fudd.”

If you’ve never heard of a “Fudd,” the name is based on the witless hunter character, Elmer Fudd, from the Bugs Bunny cartoons.  It’s not a flattering comparison.  The term “Fudd” is used by us “tactical” minded gun owners — people who think assault rifles are cool and useful — to describe those old-fashioned hunting guys who have no use for any gun that isn’t clad in varnished wood.

Fudds turn up their noses at black plastic and, as long as their “right to hunt” isn’t interfered with, don’t much care about the Second Amendment or Second Amendment Rights.  A Democrat who hunts deer could be thought of as a Fudd, in many cases, although there are always exceptions.

For years, the Fudds have tried to push out younger, more self-defense oriented shooters, sometimes going as far as banning the shooting of AR15s and AK47-pattern rifles at their gun ranges.

These types of political fights go on more often than you might realize.  They’re always a bad idea and they do nothing but chip away at all our gun rights.

The Fudds think it “can’t happen to them” because traditional hunting arms typically are the last ones regulated.  But the anti-gun people, the people who hate your right to self-defense and who will never be hunters …

… want to take away ALL guns, everywhere.

If you doubt this, just look at what happened in the UK for the model.  A society that once begged the United States for guns to help fight World War II has now made it extremely difficult for most all its citizens to own firearms.  Their violent crime rate has soared and their citizens are at the mercy of criminals who don’t care about the law.

What we’re seeing, now, though, is sort of a Fudd-ism in reverse: Tactical shooters, people who otherwise support firearms rights, are coming out against hunting and against young women like Kendall Jones, sneering that sport hunting is evil and wrong and anyone who does it should be reviled and shunned.

We expect the liberals to be ignorant, hateful, and liars.  They’ll do whatever it takes to steal your gun rights and make you just another potential victim.  And liberals, while they are individually pretty weak minded, have no problem attacking conservatives in groups.

Remember when the Obamacare debate was raging, and a bunch of SEIU union thugs beat up a black man at a rally?  His only crime was holding the wrong sign — he didn’t agree with socialized medicine. So a bunch of Democrats beat him up and called him racial slurs.  Again, none of the Democrats or their pals in the media cared about it.

Bad as that kind of thing is, I think it’s worse when our fellow shooters think they’re better than people who hunt.  It’s just as bad as when the Fudds think it “can’t happen to them” with regard to gun laws and outright gun bans.

If we become anti-Fudds, if we start turning up our noses at hunting, we end up cutting up the gun culture into smaller pieces.  The smaller those pieces get, the less influence we have as a voting whole, and the more hostile society at large becomes to all gun owners.  The libs don’t make a distinction between hunters and self-defense shooters (although they often lie and say they do).  They want to take everybody’s guns away and they don’t care how they have to do it.

Whether you are a Fudd, an anti-Fudd, or like me, just a dedicated gun owner who believes in the Second Amendment, remember that our gun rights are everybody’s responsibility.

DISHONEST: What This ‘News’ Story Doesn’t Say Is The Real Story