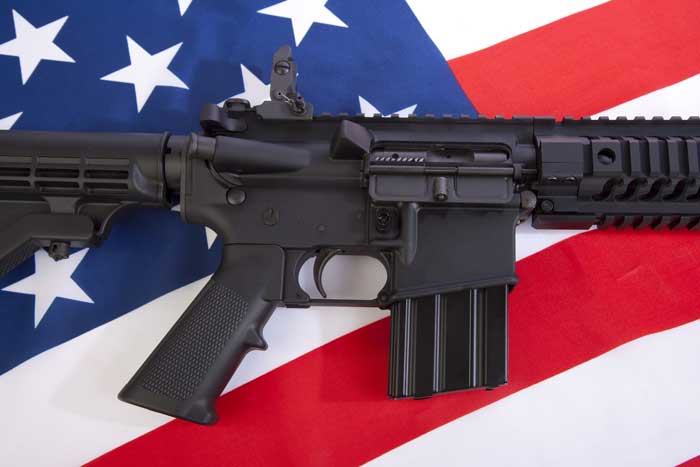 If you listen to the mainstream media, then the standard 5.56 NATO/.223 Remington cartridges the AR-15 shoots are “high powered assault weapon” rounds that have no place in civilian hands.

Yet, as we’ve discussed previously, the AR-15 is a GREAT choice for Home Defense.

And what’s even more amazing, is that it may be one of the “safest” bullets you can shoot from a gun in a home when it comes to overpenetration concerns.

Home Defense and The Risks of Over-Penetration

The truth is that almost everyone, once they start thinking about home defense, starts to think about overpenetration.

In other words: what if I miss the bad guy? Where will the bullet go? Is it going to go through a wall and hit other members of my family?

That’s what they call “over penetration”.

The truth is: almost any round that will penetrate deeply enough to hit vital organs in the human body (and stop an attacker) will penetrate typical interior home walls.

That’s because most walls are made up of little more than a couple 2×4 wood studs and drywall on each side. And maybe some insulation depending on the part of the country.

Although this fact remains, that ANY adequate self-defense round will penetrate a wall because you need it to penetrate human flesh, we still want to limit our penetration as much as possible.

Your typical choices for home defense weapons are a pistol, the shotgun, or a rifle.

Now, when most people think of overpenetration risks they assume that pistol bullets would penetrate less than the rifle or shotgun.

Pistol bullets consistently penetrate the most.

FBI and Independent Testing Has Consistently Shown .223/5.56 NATO Fired From AR-15’s Do Not Over Penetrate More Than Pistol/Shotgun

First up is this older article by R.K. Taubert, a retired FBI agent with over 20 years experience who conducted extensive counter-terrorism and weapons research while with the Bureau.

To quote Mr Taubert, (emphasis mine) ” … As a result of renewed law enforcement interest in the .223 round and in the newer weapons systems developed around it, the FBI recently subjected several various .223 caliber projectiles to 13 different ballistic tests and compared their performance to that of SMG-fired hollow point pistol bullets in 9mm, 10mm, and .40 S&W calibers.

“Bottom Line: In every test, with the exception of soft body armor, which none of the SMG fired rounds defeated, the .223 penetrated less on average than any of the pistol bullets.”

“The only calibers which did NOT exit the “house” were .223 (5.56) soft point and hollow point loaded bullets.”

Then there are the “Box O’ Truth” tests with great pictures where they found, “… Common pistol rounds easily penetrated all 4 walls spaced out at room distances … The 12 gauge shotgun went through 4 walls like they were not there … The 5.56 rounds deviated greatly from the original flight path once they started tumbling. This occurred after the second wall.”

And this drywall testing concluded, “Moving away from rifle rounds takes us from fascinating discoveries into the realm of mythbusting. Handgun rounds, for instance, may penetrate less than rifle rounds–but only if the rifle rounds in question are full-power ball ammo. The relatively slow speed and heavy weight of handgun bullets make them a poor choice for limiting interior wall penetration, which is why professional door-kicker types have abandoned pistol-caliber submachineguns in favor of .223 carbines.”

And this interesting test at outdoorub found “The pistol rounds were seemingly unaffected by the drywall and/or wood barriers. There was no observable deviation or fragmentation of the 9mm projectiles. You’d be safe counting on a pistol round to keep going, and going, and going … Even though the .223 rounds start with a lot more energy, they tend to lose it quickly when encountering the barriers in this test … Moral of the story? Don’t trust the mainstream media. Those high-powered, so called “assault weapons” may be safer than your average pistol for inside-the-home defense.”

(NOTE: many of the rounds tested at outdoohub are found on the “approved list” of AR-15 self-defense ammo here.)

When It Comes To Home Defense, The AR-15 Rifle Ammo Is Less Likely To Over-Penetrate

The truth is that AR-15 ammo is less likely to overpenetrate. Yet it is highly effective at stopping threats. Sounds like a good choice for Home Defense to me.

Please Note: that all this “rifle vs shotgun vs pistol” testing is comparing the AR-15 in standard 5.56/.223 to the pistols and shotguns …

That means that “other rifles” such as AK-47’s in 7.62×39, .308 hunting rifles or AR-10 style semi-autos, etc are not included in these tests. THOSE rifle bullets would most likely penetrate much, much further because they are bigger, heavier bullets (though I’m not aware of much actual testing).

The bottom line to remember in all of this though is to still be aware of your target and what is around/beyond it because ALL bullets that will penetrate deep enough to stop an attacker will still penetrate at least one interior wall. And even a bullet, like the .223 that tends to lose steam and deviate after a wall or two can still be deadly to your family/innocents.

Check out these other articles for more on excellent performing 5.56 NATO/.223 ammo:

– The Best Home Defense Ammo For Your AR-15?

Anyways, I hope this clears up some misconceptions when it comes to choosing home defense ammo (or a gun) that will be least likely to penetrate.